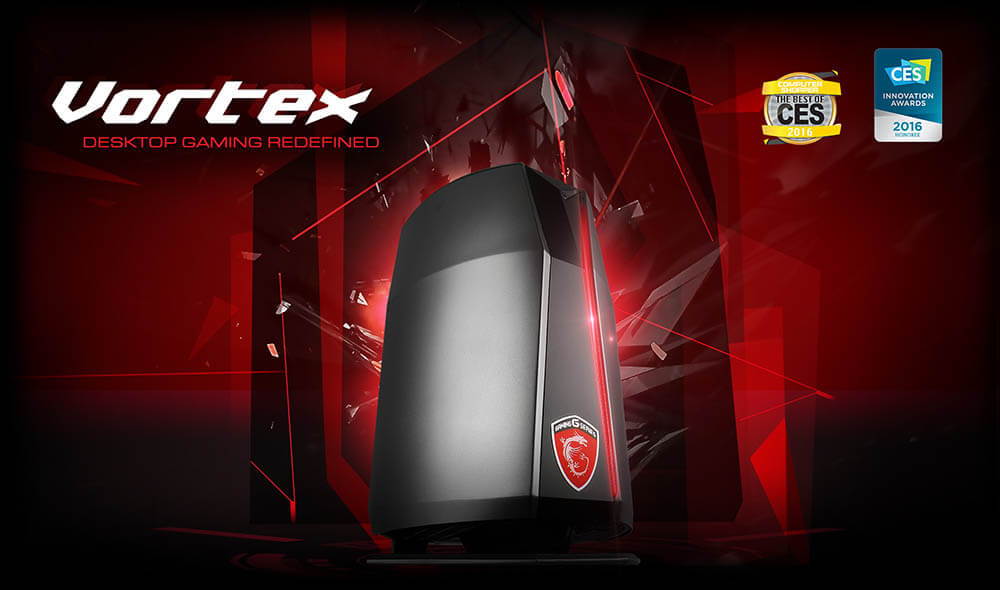 Saying we poured our blood, sweat and tears isn’t enough to describe the work put into designing and engineering the Vortex. We’re proud to say that it has paid off. With an outside-the-box design, literally, the Vortex is an engineering feat that goes against all the status quos of desktop PC’s to bring about a revolutionary take on desktop gaming.

Everything you know is about to change. Standing at a mere 10.5” high, weighing as little as 8.8lbs, and measuring in at 6.5L, the Vortex pushes more power per inch than most mid to full size tower gaming PC’s without the having to deal with the same bulkiness or weight.

MORE THAN MEETS THE EYE

Don’t let it’s size fool you. The Vortex packs as much punch as a fully loaded desktop gaming PC, sporting the most extreme hardware and cutting-edge technology without the massive weight.

DOUBLE THE POWER, QUADRUPLE THE PIXELS

Made to fit nearly anywhere, the Vortex is the perfect system for minimalists with more than enough power to satiate any type of gamer.

Forget single display setups, the Vortex has the ability to support up to 6 displays to change your room into a command center. Conquer your enemies, manage your stream, and update your status on social media all at the same time. The Vortex also supports NVIDIA Surround View for a more immersive gaming experience.

Take control of the Vortex’s Dragon Center from your phone to adjust performance, monitor its current status, or customize the colors at will.

Access all your favorite apps with the app portal. Customize it, categorize it, and launch your programs in just one click.

We went all out with our ports to give you the freedom to connect everything and anything you need to get your battle station fully equipped. Multiple USB 3.1 ports allow you to connect all your gaming peripherals anddevices. A total of 6 display ports (HDMI, Thunderbolt 3 and mini-Display) can turn your room into a command center while supporting 4K displays. Dual Killer Networking Gigabit ports can double the speed and stability or connect to multiple networks.

Save on space and cable clutter with the integrated, super-efficient 80 plus Gold-Certified power supply. Use less energy, generate less heat, and maintain system stability over longer periods of use while still powering the extreme performance of the Vortex.

Originally developed for French military fighter pilots, Nahimic’s digital audio technology is now the hands of gamers. Capture every tidbit of ambient sound in the environment, feel every explosion or the crack of gunfire in the distance, and hear every footstep with a 360 surround sound experience for competitive play.

Gaming today requires more bandwidth than ever, especially for those who stream and game at the same time. Enter Killer Doubltshot-X3 Pro. Take advantage of your network with dual Killer Ethernet E2400 ports and the Killer Wireless-AC 1535. Run all three at the same time for increased network bandwidth, smoother gameplay, and better streaming quality.

Customize the speed and bandwidth for all your programs with the easy-to-use Killer Network Manager. Prioritize bandwidth for programs that you use more often and see which how much of your network is used for each application.

SHARP AS A SAMURAI SWORD Aegis is a real weapon shield, designed from scratch and built to be the ultimate defense and attack platform. Only the best equipment is chosen for Aegis...